This post has been in drafts for over a year now. I wrote this as a response to the countless messages I get on Linkedin/Twitter asking how to move to a product role. Over the past 5 years I have worked for various startups, built a few interesting products and switched from a developer to a product manager. This is also my attempt to summarise my career as it stands now and includes learnings from my previous jobs.

I have worked at:

IOCL and Avaya were easy. I just had to fill a form and let my college (BITS) and my CGPA (6.0/10) take care of the rest. Thanks to my CGPA I knew I had no chance of getting internships at top tier firms. I tried to learn as much as I could at both places, and got a few good projects under my belt.

I got into RedBus thanks to something I learnt quite early in my life: there are few people in this world who have the audacity to go after what they really want in life. At BITS, I saw a friend of mine send out close to 200 applications to professors all over the world to land a summer internship abroad. There were people who had much better CGPA. There were people who probably were better at Computer Science than him. But none of them had his drive.

My only experience till 3rd year of college was a summer internship at IOCL and a failed attempt at starting up. Inspired by my friend, I decided to send out as many applications as possible, no matter how many rejections I got. Thankfully the first email itself worked. 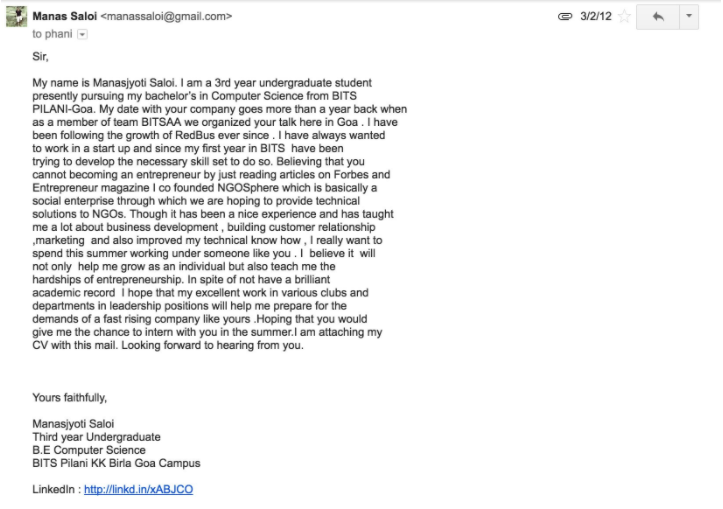 By leadership positions I meant a position at the Student Council as an elected representative from my hostel and being a co-founder of NGOSphere (which I will talk about later in this post). I still got an interview. Showing up something is the only thing you need to do, even if you might thing you are not there yet.

Shankar Prasad, the COO, told me that RedBus was exploring expansion in the North East. They had started operations almost a year before, but they had very few tie ups and hence wanted someone to go there. My work was to convince bus operators & travel agencies to partner with RedBus, scale up RedBus’s operations and run a few marketing projects. I don’t know why they felt that I was the guy who could do that, but I was still thankful and jumped at the opportunity. 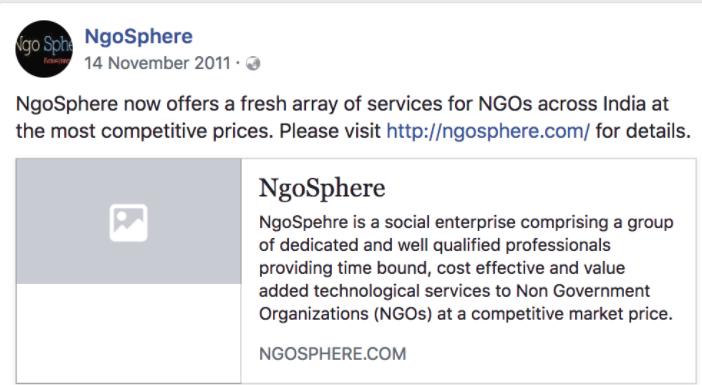 This was our announcement post on Facebook. We were happy to have our own startup. We were vain. And naive. But we tried.

During my 2nd year of college I got fascinated with the world of startups. This was the beginning of the startup boom in India. Everywhere I turned, I could see people starting up. Also maybe, I was reading too much TechCrunch.

Here was the idea: There were around 2 million NGOs in India in 2011. Our goal was to get at least 1% of them online. Provide them various services: web site development, brochure design, fund raising, branding. Our goal was to start a web design agency and target only this market.

Depending on college placements was the stupidest mistake I made. I was hoping some fast growing startup would come to college and offer me some Business Development or Marketing position. I was not that keen on moving to a developer role. Coding never excited me in college, and I did not know then that something like product management existed. I did not even interview for most of the software companies which came in the beginning of placement season. Only after almost the entire placements were done, I realised what a mistake I had made; with a 6.0 (/10) CGPA I was in deep waters. I had not applied anywhere off campus too. I was running out of options.

So I did what any sane guy at my situation would do: Read Cormen (textbook on Data Structures) cover to cover and started sitting for interviews.

I still kept getting rejected (messing up in the final rounds of a few companies) and was one of the last guys in my Computer Science batch to get placed. It was a humbling experience. My father would call me every night asking when Microsoft/Google is coming and I had to remind him again and again that with my CGPA I was not even eligible to sit for their interviews.

I finally got placed in a startup called Kony Labs. I joined their team which used Kony Studio (their proprietary platform) to build apps for various companies.The advantage of Kony Studio is that it can generate builds for multiple platforms from a single JS codebase. I wrote about my interview experiences here: Want To Work For An Indian Startup? Here’s What You Need to Do.

I worked at KonyLabs for just 2 months before joining Kore, which spun out from the company. It had the same management team and their goal was to build the next generation workplace collaboration platform. It was the best decision I made. Instead of being one of the 100s of developers I was not part of a small startup where I could learn faster. I would go on to work on the Android app before moving to the Server team.

While I was at Kore, I received this time capsule I had set in 2012. This capsule was from a mediocre college student who wanted his future self to answer this simple question: “Did you make something good out of your life or are you still getting screwed?”

I realised that even though I could continue at Kore, working as a developer, I did not see myself as a coder 10 years down the line. So I thought “why waste any more time?”

I told my manager that I was quitting and put in my papers. I had a 2 months notice period and in the worst case I was willing to go back to being a dev. Or maybe I could just join a startup as a Product Management intern? I was willing to take the risk. I had been thinking about the switch for a long time and I knew I would just keep thinking about it and not do anything if I was not pushing myself hard enough and showed enough intent. And what is the best way to show intent than quitting your safe job without a new job offer!

The time capsule which changed my life. Literally.

Instead of writing on how I prepared for Product Management interviews in particular I am linking some really good resources here:

How to Prepare for a Product Manager Interview by former Facebook PM.

You can also go through all the Product School videos. Also read Crack the PM Interview book.

I have also already written on how to look for startup jobs. I followed the exact same approach. Kept pitching to CEOs/Head of Products on how I can add value. Being a generalist really helped to get a foot in the door. But a lack of prior product experience led to a lot of rejections too. Finally I interviewed with 2 startups- CouponDunia and Zoomcar.

I had connected with Sameer, the CEO of CouponDunia on Angellist and I sent my pitch to him. 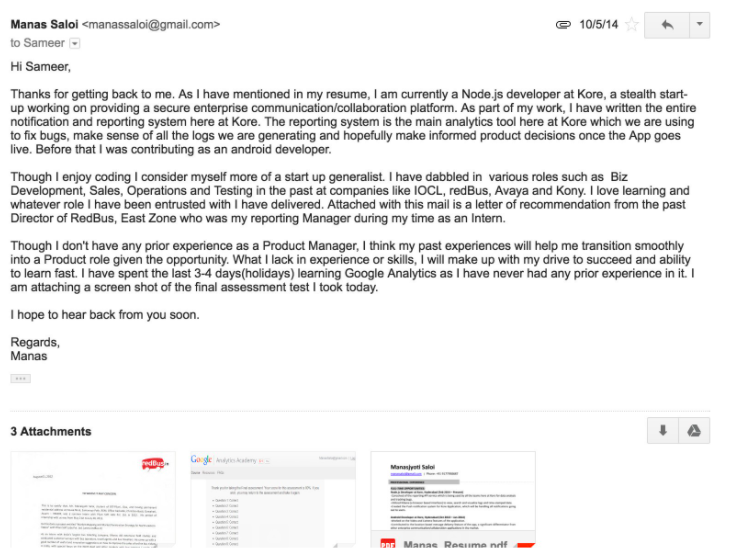 The answer to why I wanted to move to a Product role:

I wrote a long product critique of the app as well as the website. I even found broken links. I had seen how people apply at companies without even using their products. I wanted to show that I cared about the company. I had invested enough time to understand the market as well as the existing products. All I wanted now was a chance. 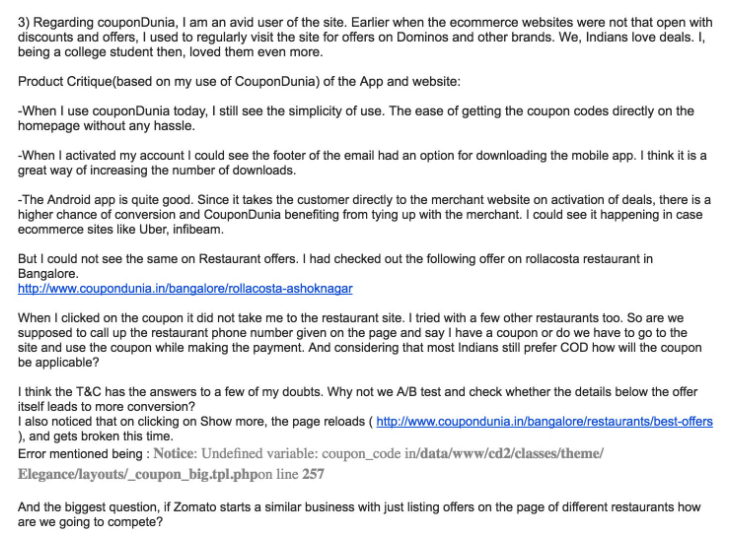 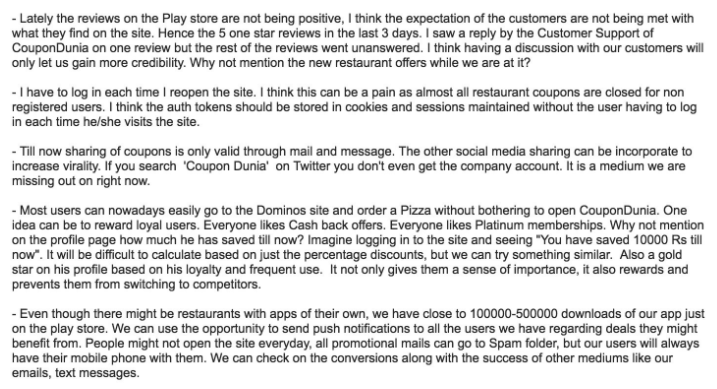 More ideas to grow the usage

I was loving my life at CouponDunia. I had a boss who liked me, who gave me the freedom to do whatever I wanted. But I also realised that I was getting too comfortable in my life/career. I was no longer learning as much. I had scaled CashBoss to 1million installs and profitability but if we were to reach the next level, we would need a far bigger investment in Marketing.

I was also seriously contemplating switching to one of the “Rocket Ships”. People suggest you to jump into one, no matter what role you get. I was helping a few other startups during this time including one which eventually got acquired by Quikr.

It was during that time Craftsvilla reached out to me. It was supposed to be a random coffee meet with the VP of Product but things turned out for the good and I got a job offer. The following points made the role really exciting:

I talked about ways to demonstrate value earlier. Even before I officially joined Craftsvilla, I started working on growth. Thinking about how to make Craftsvilla the next unicorn was all I could think of. 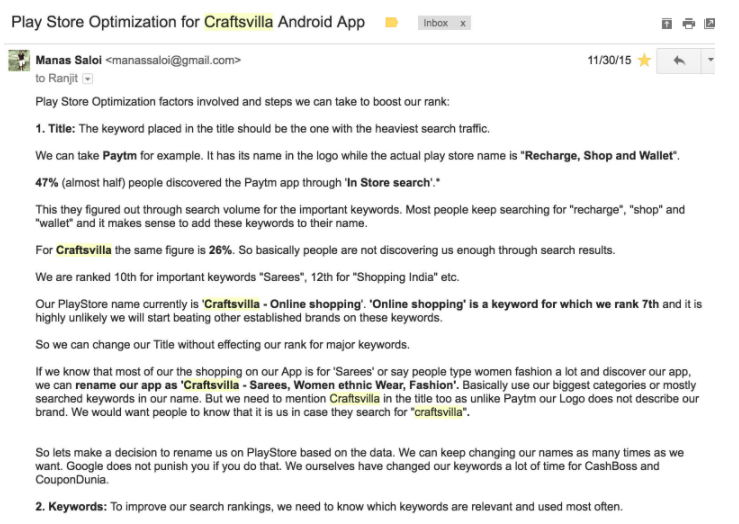 I spent the next 3 months at home. For a change I did not have to respond to mails asking why conversion dropped by 20% on a Sunday afternoon. I met quite a few startups (based in Guwahati). It was good fun but time was running out. I needed to look for a job again.

I evaluated my options. I did not want to join another e-commerce company unless it was a market leader. Chat platforms were becoming huge. Lot of interesting companies working in the space. I had read like 100 blogposts on Wechat already.

So I decided to apply to the only two companies in India working on Chat: Hike and Flock. I wrote a 10 pager on how to take Hike to the next level and sent it to their Head of Growth. I also dropped a mail to Bhavin, the CEO of Directi.

Fun fact: When I say I hope this somehow lands in your inbox I meant it literally. I normally don’t go through the typical HR route and just reach out to the Hiring manager/Head of Product/ CEO with a value proposition mail. And I sure as hope it lands on their Inbox and not the spam folder.

first part of the mail/pitch 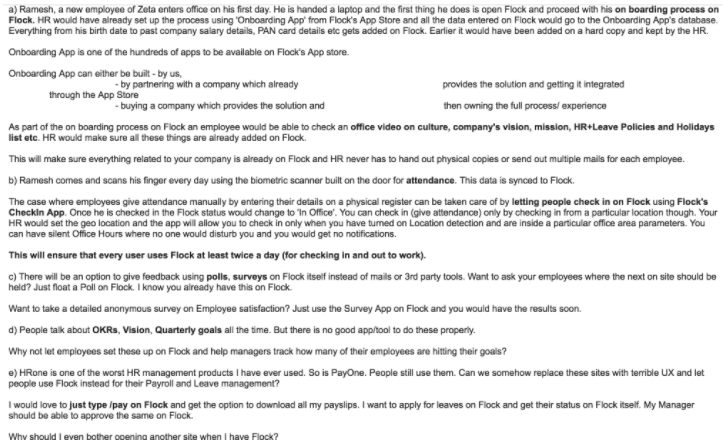 a bunch of product ideas 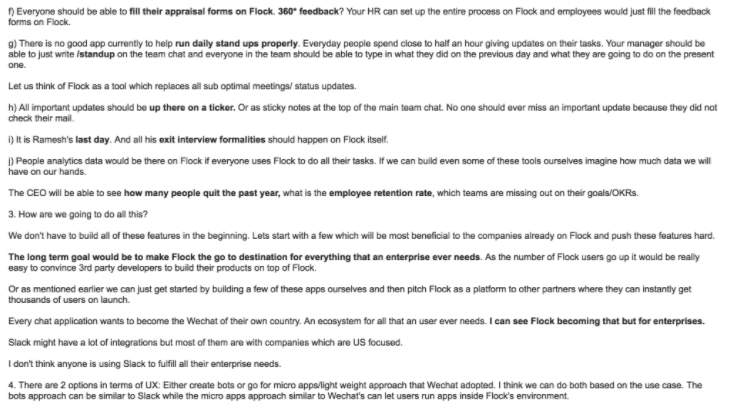 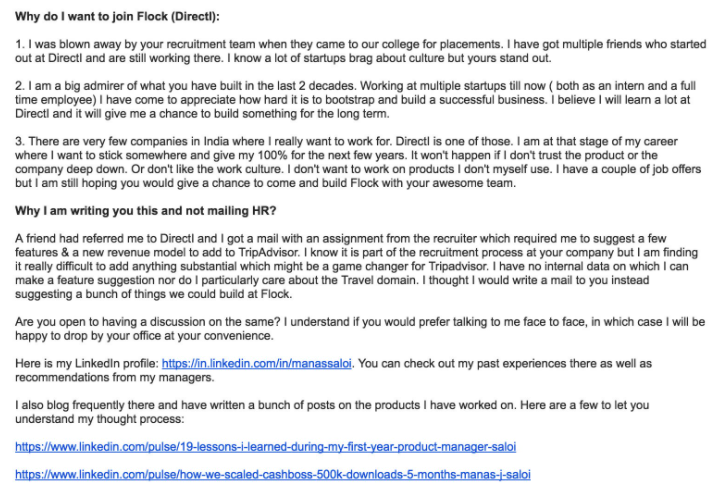 Always explain the ‘why’

I managed to get into Directi and join their Apps team. I have been working on exactly the same things I mentioned in the mail. There have been pros as well as cons but there won’t be a retrospective section for Directi for now.

Why I wrote this?

I know there is no point writing a retrospective for your career when it has not even been 5 years since you passed out of college. This might even look narcissistic somehow. But I did end up doing a lot of things in my life over the last few years which I wanted as a teenager in college. I did not go to any MBA school. I worked at various promising startups and gave my best (till I could, and then moved on). I hope this inspires someone who is still at college and wondering whether they can ever find modest level of professional success.

This also answers how I got into Product.