I had been waiting to buy a personal laptop for a couple of years now.

I get the Mac M1 after months of going through 100+ YouTube videos + dozens of Reddit threads. The first days of using the M1 were brilliant! Fast. The battery lasts 1.5 days.

A couple of days later the problem starts. I start getting a random restart popup. It is hard to reproduce but appears erratically - sometimes a dozen times a day, and sometimes just a couple of times.

I reach out to Apple support. And from here the Kafkaesque nightmare begins.

They have no clue. I google and see that other people have faced the same issue here and here.

For me, I get this prompt, but the laptop does not restart. I know there has to be a deeper issue. Apple support told me to do an SMC reset. I do that but it did not help. I get on a call with 2-3 different Apple support representatives, no one could figure out where the real problem is. Is it hardware, is it software?

Apple Support requests me to the go to the nearby Planetcare. There they claim it is a software issue and that it can be fixed easily.

I drop off my laptop, they reinstall the OS, claim it was under observation and there is no problem. I get it back.The Restart prompts start appearing within an hour. I take it back. This time they say it is a hardware issue. I bring the laptop back to them. Few days later, they claim that they have replaced the logic board and the Touch ID button, and now the issue is fixed. They don’t give me any documents; to prove they did anything.

I bring the laptop back. The issue is still there. I call Apple support again. They say that Planet care might not have fixed the issue. They tell me now to go to iCare. I take my laptop there. I can reproduce the issue multiple times in front of them.They said that it is fixable. I keep the laptop with them for a week. They reinstall the OS and give it back. I tell them that this was the same thing Planetcare did. Why would this reinstall fix the issue when it did not get fixed earlier?

iCare tells me: sorry sir, I can’t see any repair done by Planetcare. If it was done, then it would show on our portal.

At this point, I am very confused. Which of these service centers is lying and why would they lie? I push iCare to give it in writing that Planetcare did not replace any hardware. The iCare person goes back inside, checks their portal and comes back to say that they can see Planetcare’s repair history. And it seems they replaced the logic board. They say with the hardware and now OS reinstall the issue is fixed for sure. I asked if they figured out the root cause. They had no clue. So after arguing for half an hour, I bring my laptop home. This time I don’t even log in using my Apple ID. I keep using the user that iCare people had created. They hypothesize that somehow my iCloud data is corrupting the hardware and forcing these restart alerts.

As predicted by me the issue came back. Then it is back to more calls with Apple support and they now claim the PlanetCare people did not repair the hardware and there is no documentation on the same. So 3 different sources: apple support, planetcare, and icare all saying different things. So I have no idea who is lying, where is the issue, and how to fix my goddamn Mac. The useless apple care+ that I paid a premium for has not helped. And it is not just me that is facing this ordeal!

1st generation hardware is always risky. And sometimes it is worth the risk. What is not worth is shitty support from a company that is considered the best in the world for customer delight and also for their premium hardware for which you pay a bomb.

Update on 25th March 2021: My M1 is still not fixed. It has been 1.5 months, 3 visits to two different service centers (6 visits if you count both submitting and collecting the laptop back separately), and dozens of calls with Apple Support. Now they are asking me to visit the service center again for the 4th time without a guarantee that this issue will be fixed if I go there. They say that Engineering team is recommending replacement of the top case if we can replicate the issue at the service center. BTW I had shared 20+ screenshots to Apple Support and also my device logs so that they realise that it is not some one off issue. They still want confirmation from the service center. So yeah, there is nothing I can do but go to the service center. Note that there is a pandemic going on, and there is no other way for me get my laptop fixed than by physically delivery and taking the laptop. It is astounding how bad Apple Support is. Also, I have purchased AppleCare+ for 3 years. I have just given up at this point.

Bonus: The latest person who contacted me from Apple Support is now saying that PlanetCare had in fact replaced my Logic board and Touchid. There is no consistency among there support staff, even though they have a written record of my chats with screenshots. All of them are saying different things every time I get on a call with someone from Support.

Update on 31st March 2021: I went to iCare. They recommended a full replacement that they could provide if I was okay foregoing 3 years AppleCare+. Their point: I could just get a new boxed piece from them instead of running from one service center to another. I said No because I am not sure if these new M1s will last long and I was not comfortable with foregoing my extended warranty. I then went to PlanetCare hoping that they could go ahead with what Apple Support recommended.

Update on 3rd April 2021: Apple Support says the issue is with the top case; the same recommendation has come from Apple Engineering. But PlanetCare claims Apple Support never contacted them with their recommendation. And since they are unable to replicate the issue, they will close the case and return the laptop. This is inspite of me replicating the issue in front of PlanetCare’s technician and and also sharing with them Apple Engineering team’s recommendation on the next steps. I am still not sure how there is such a big gap in communication between different stakeholders in the support ecosystem. They don’t trust each other. They don’t want to share notes. They just want to hassle their customers and extract whatever revenue they can.

Update on 6th April 2021: PlanetCare called me today asking me to take the laptop back because it seems there are no issue and the restart popup coming is normal. I asked them why did they replace the logic board and touchid earlier if there was no issue? They gave some vague answers around that. Then told me that Apple Support was okay with replacing the logic board and touchid, but have refused to replace the top case. Now remember: Apple Support themselves forced me to go to the service center for the 4th time telling me that Engineering team’s recommendation is to replace the top case and the issue would be fixed if we follow it. Another interesting thing: both PlanetCare and Apple Support refused to get on a conference call with me and because of that it is hard for me to figure out what is actually happening in the background and which party is lying. I asked the PlanetCare person that if the popup coming is normal on pressing the touchid, then reproduce the popup, take a screenshot and send. Their reply: Sorry sir, it is not coming now. It was coming earlier. So it means the issue is fixed.

I never really understood the definition of gaslighting until this ordeal started. It is amazing how people still buy such expensive hardware from Apple.

I am planning to get the laptop back. It has been more than 2 months since I bought this laptop; have barely used it. I will consider 1.2L, the amount I paid, as money gone down the drain. I am happy that I did not get sucked more into the Apple ecosystem. I was even planning to buy an iPhone post my Macbook purchase. Why? Because then I could get an Apple watch and track my health stats. Thanks to Narayana for saving me.

Final update: Got my Laptop back. PlanetCare refused to accept that there is an issue with the laptop and told me to come and take the laptop home. They had kept the laptop for 10 days and apparently they could not replicate the restart popup issue. I take possession of the laptop. Turn it back from sleep. This is what I see. 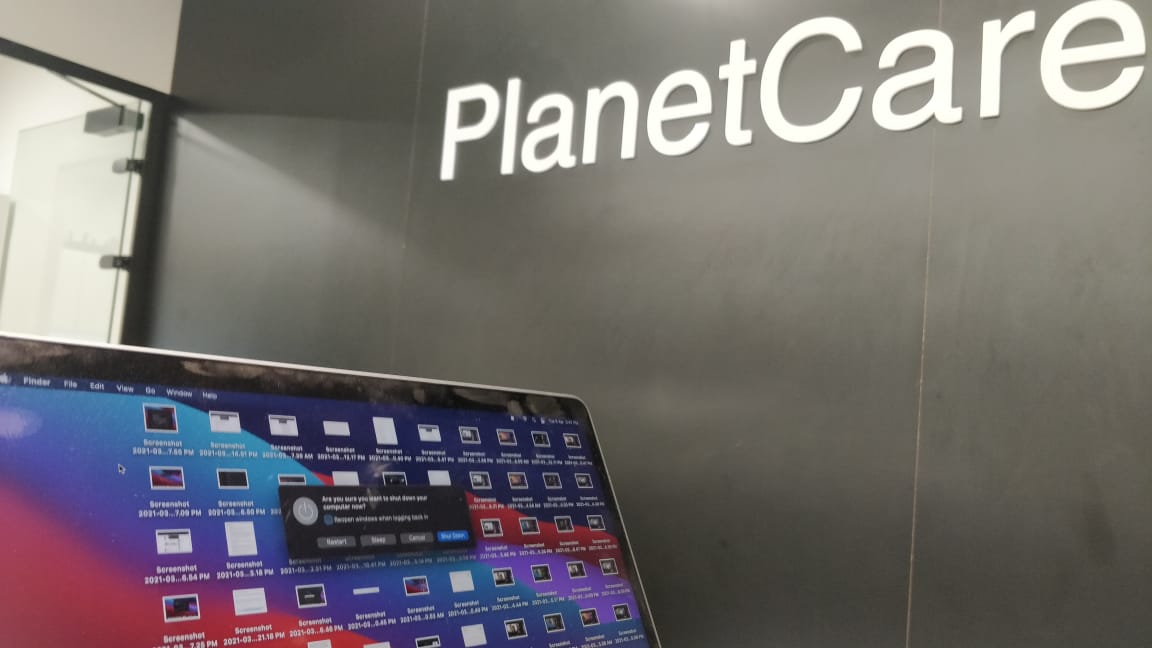 Note: They had claimed that they could not reproduce the pop up inspite of keeping my laptop for 10 days. Instead of fighting more, I just decided to cut my losses and come back home. 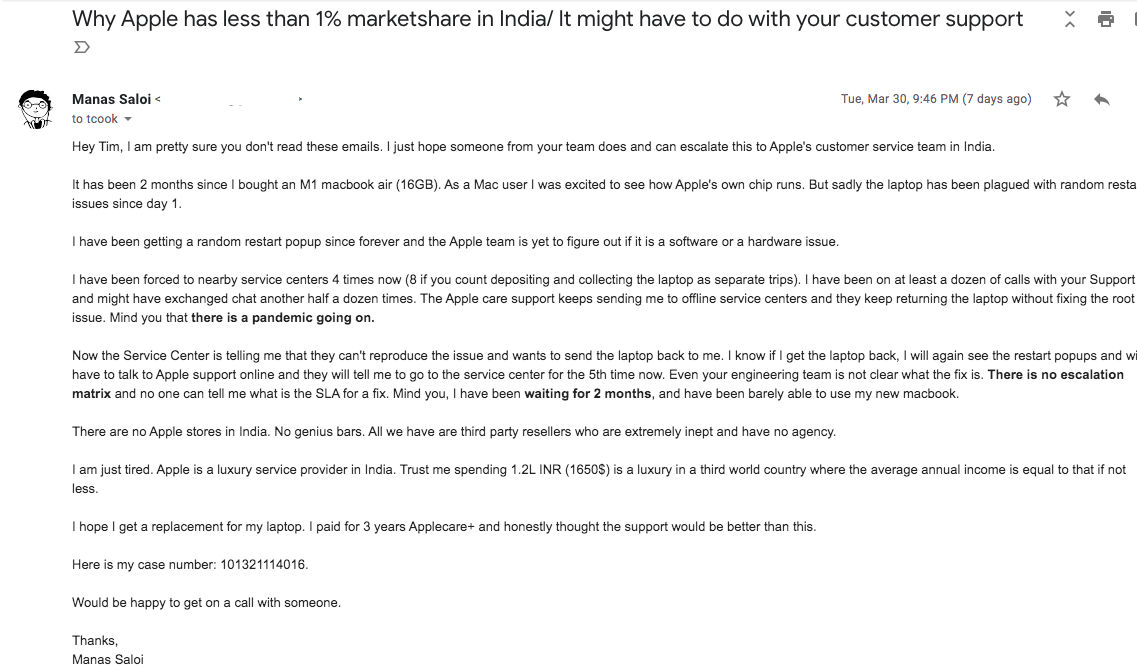 Update on 8th April 2021: I got a call from from Tim Cook’s executive liason. He offered to own the case and helped me get the Topcase replaced. Since I have visited the service center 4 times and don’t want to go again for the 5th time, that too at a time when there might be more stringent Covid restrictions coming. I’ve decided to just keep the laptop as it is for now. I have disabled touchid that was causing the issue and will be replacing the top case in a few months when the Covid situation gets better. I am surprised that emailing the CEO approach actually worked. There is some good left in this world :)

Update on 8th May 2021: It is one month since my last update. I am using my laptop with the touch id button disabled. The performance of the laptop has been great so far. I think the trade off has been worth it. I know I had a shitty experience with Apple, but this laptop is truly next generation, a class above any alternative available out there. So if you are considering buying the laptop, I would say go for it.