The concept of timing is not discussed enough.

If I had joined by company two years prior, even for the same role I did in 2018, and had no further growth, I would have got enough stocks to never have to worry about money again.

A friend of mine was headhunted to head engineering at an early startup. He did not join. In the last one year it has grown so much that if he joined now he would not get the same role and stocks he would have got then. Has my friend’s skills become 10x better or worse than one year back? Not but the potential outcome for him at this startup has. At a time when startups are becoming a unicorn inside 2 years, timing matters even more.

He kept overthinking it, did not take the plunge, and now he thinks it is too late. Maybe it is not late even now. Maybe the startup grows 10X from here. Who knows. Or maybe the startup would not eventually turn out to be a success story in the long run and staying back at his current role was the right choice. Who knows?

Note: I’m not saying that people who take risks earlier should not get rewarded more. What I’m saying is that timing does matter a lot. What people call luck I am calling it timing. There are 2 components to career growth: your own skills and the machinery/ environment. You can be the most gyaani product leader in the startup ecosystem but if there is a pandemic going on, you might be far more successful at a place that does not involve taking people from A to B. See I am self aware to joke at my expense.

Let’s take my 7 years in Product Management. I have worked at

If I’m being honest, I have probably worked 3x harder in my previous startups. I am probably more or less the same IQ. Have not become a lot smarter or stupider. Then why is Gojek the biggest success I have had in my career?

It has probably got to do a lot with Gojek being what it is in Indonesia than me doing something magically different this time vs other startups I have been part of.

My manager replied to my thoughts on timing and replied “Identifying the next GoJek is hard …Very few companies scale to $10bn and above and not leave you scarred.” And I agree. I am happy for the people who made their millions here. They got their payoff for being part of a rocketship. I did not join early and hence my outcome has been comparatively lesser.

In my quest to become more social this year, I’ve met a lot of senior leaders in the Indian startup ecosystem. And one topic that comes up again and again: titles. Everyone downplays the importance of them. They tell me that titles or career ladder climbing is dumb and one should spend time doing things that bring meaning to us. One mentor even told me that I am playing a finite game and I should move beyond it. Another gave me his example of how he was managing so many people in his org as a senior leader and now doing something completely different. While I do agree with some parts of their thinking, I often argue that they are giving this gyaan only after winning the startup lottery ticket.

The same gyaan they give now would not have been the same, people might not even have taken them seriously, if their well timed bet did not pay off.

A lot of these people are millionaires, paper if not liquid money. They are well known in the ecosystem. If they want they can just give 24*7 on Twitter and never have to work another day in their lives.

The fact that they can choose what they do with their time is a privilege. They did work hard, but there was a lot of luck involved too. It is almost like a lottery winner giving advice on how to win the lottery.

I told a mentor of mine who is a senior leader in Gojek that he has earned the privilege of doing what he wants with his time here today by joining early. He is out of the rat race. No title required. That is his identity. While for me it is Manas, Manager, Transport. This Manager title means more people accept my invite now while when I was new to Gojek a lot of leaders did not even bother to decline my meetings with a note. Just declined. Because they could.

If someone in my position is stuck at the same level and comp for years, they will be judged for their lack of growth. Listen to this podcast with Marc Lore on describing how he hires people.

I call bullshit to people who say titles don’t matter.

Also I find it super funny that it is always these senior leaders who say titles don’t matter. Have you ever heard a PM decline a promotion to SPM because “titles don’t matter”. The whole of a performance review cycle is to pigeonhole people into neatly defined career levels.

Story of a friend: A friend was down levelled when he joined his company. His salary was vastly less than other people with similar years of experience. He loved the company still and wanted to stick around. All he wanted was to be treated fairly and be levelled correctly. He thought it was only fair that he got promoted to reflect his contribution to the company. He was driving KRs at a company level. For some reason he could not get promoted in his org. Long story short, he decided to talk to other leaders and change teams. My friend was at level L. He saw an opportunity in another org. They were hiring for L+1. The opening had come because the person at that role had moved out to another org at L+2. So basically my friend was replacing someone who is at L+2 competence. When he talked to the hiring manager, he was given the same bullshit excuse most leaders give when they want to under level people: “Oh, titles/ levels, these things don’t matter. If you come, you should come for the role and not for the level or salary jump.” My friend decided to fuck off, started interviewing outside, got multiple L+2 roles with 2-3X salary bumps. When he left the CEO interviewed him too as part of his exit interview. The could not understand why such a critical hire would leave. His Manager even brought up his promotion (L+1). But it was too little too late.

Now lets jump to the signalling aspect of this. When people say titles don’t matter, they are beyond these trivial things, they are actually signalling. What are they signalling: ‘Hey, see I am such a big boy, I don’t care about title or money.’

Yes, you have reached a level where these things might not matter. But what about someone who just started their career and are yet to win the startup lottery?

When I wrote this as a tread on Twitter I was just dumping random thoughts that I had in my head. Over the last few months, I have started sharing fewer things on social media. In a world where people are virtue signalling 24*7 and celebrating success, talking about actual problems and complaining about middle management is a negative signal. Heck, even calling yourself a middle manager is a negative signal. People form judgments quickly. And they are quicker to give career advice. I have lost count of people who give me unsolicited advice on career because they feel I am unhappy with my job or something.

Also, I joined as an IC in the Transport org of Gojek, became a Product Lead and now manage half of the product team. So I’m definitely not complaining my own growth. Also, my manager has supported me in my growth. This is what he sent me on Whatsapp when we were discussing titles.

To leaders in the startup ecosytem: I would just request you to keep an open mind. Don’t assume you know everything. Just ask your reports. Track how many people are leaving your company because you are being inflexible in your views. I know of enough companies that thought they were perfect and did not need to change and then the floodgates opened and employees started quitting en masse.

After I tweeted this out as a thread yesterday, a lot of people DMed me privately and also supported the same viewpoint: Titles do matter.

Here is private DM from another senior person in the ecosystem who was a senior leader in a decacorn.

The strongest counterargument to this was given by another senior leader who shared data points on various companies and argued that giving title did not also lead to better retention or company growth. He gave example of a company where there were 80 VPs at one point of time. And it only led to chaos.

The laziest argument on this is given by people who reply with “but what about stripe”. I always reply (copied this from Vikrama): “Sir, your startup is not stripe and copying stripe’s flat heirarchy won’t make it either. Correlation causation and all that.:

Another argument is: Wow. You care about titles then. Does work not matter?

I sent this as a reply to someone yesterday. I also sent the same to my manager when he was joking why I have not left Gojek if I want more money/ better title. 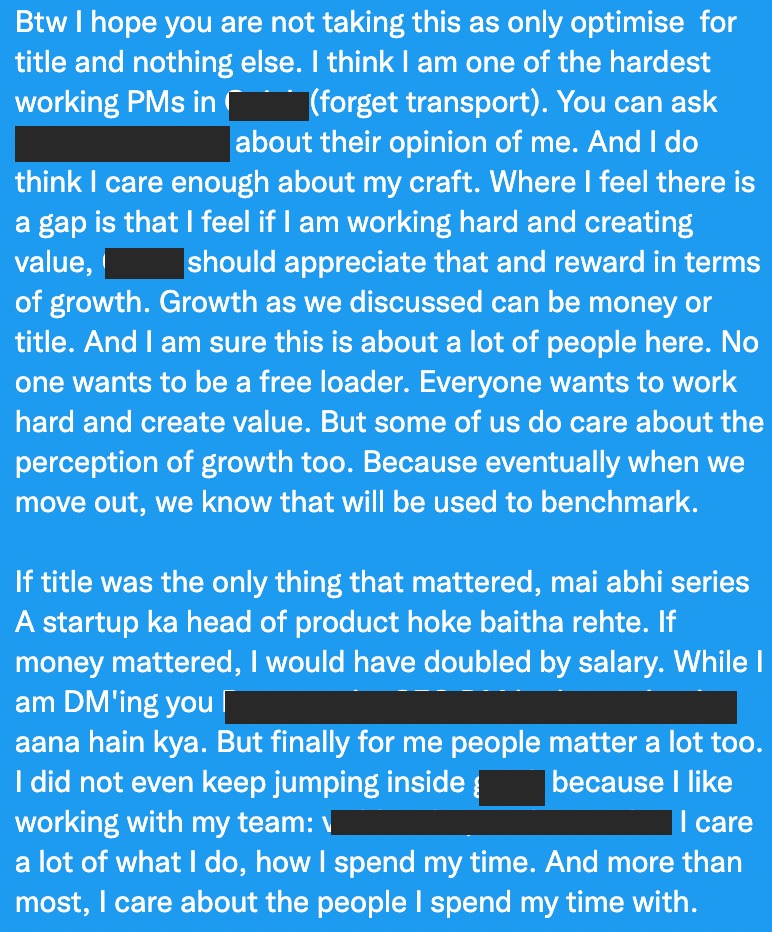 I know this might come off as too strong. I hate hedging my words. And if you have followed me on Twitter till now you know that I have no filter.