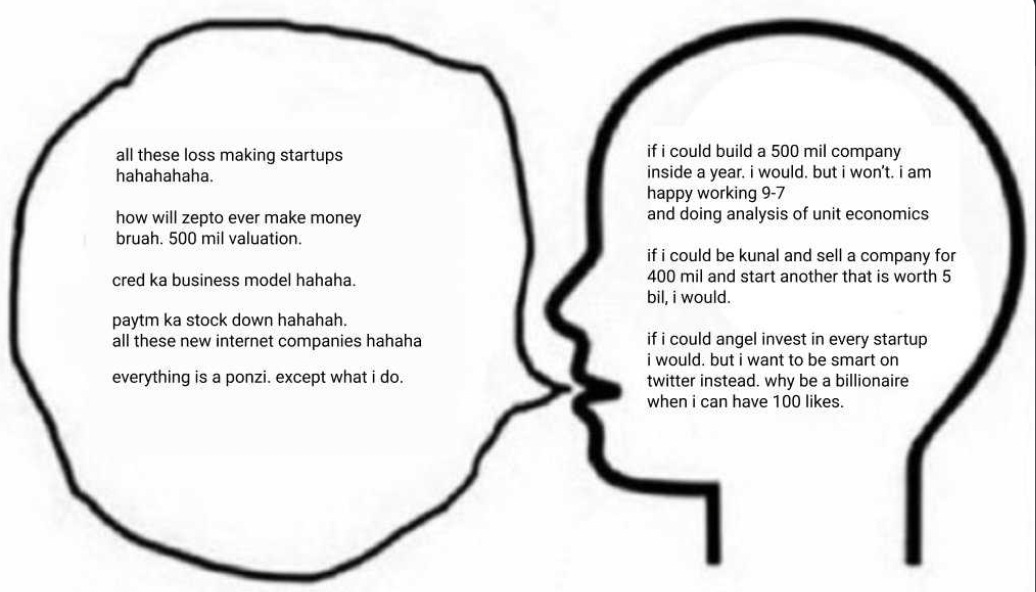 Let’s face it, you are probably a midwit.

I see you dunking on Deepinder Goyal’s tweets. QT’ing Kunal Shah and offering your 2 cents on Cred. Commenting on SriHarsha’s tweet about how on-demand is uncertain.

Whenever you get a chance, you go ackchuaaallly on other people’s tweets. You feel your opinion is very important and Deepinder should listen and learn.

But the sad reality is that just because your reply on Deepinder Goyal’s tweet gets the same visibility as the original tweet, does not mean you are also a public company CEO.

Forget being a CEO, you probably have not built anything.

Just because you tweet ‘what is cred’s business model bro hahaha’, and get a 100 likes, does not mean you are as successful as Kunal Shah.

This was the hardest lesson for me to learn. As someone who reads a 100 books every year, has listened to a 1000+ podcast in his lifetime, and worked at multiple startups, I can quote unit economics of businesses in my sleep, but what I took a long time to accept is that I am a midwit when it comes to comparison with other successful people. And my opinion probably does not mean as much.

I know midwit is a position on the IQ scale. I have never measured mine. But I know that in terms of outcome, be it impact, status, or money, I am somewhere in the middle. So are you. Mostly. Ask this simple question: If you knew more than Deepinder or Sriharsha and are a master of unit economics, then why have you not built a better Zomato?

As someone who silently lurks on other people’s profiles and tweets on social media, reading comments from other people, never bothering to reply or QT, I will tell you what I have learned over the years.

And it ties a lot to the some of the ideas of mimesis. Yes, friends, I am a Rene Girard enthusiast.

In old times, CEOs used to be in celebrities. Our only access to them, was one way, was through the Times of India or The Telegraph or The Hindu. We read their takes, and moved on. There was no compulsion to reply or comment. Because there was no way to reply.  Our midwit takes would not even reach Narayan Murthy or Ratan Tata or Dhirubhai Ambani. Thanks to the internet we are now in the same platforms as these other successful people. And we feel that our opinion on company building [sourced from PG’s blogs] is as important as people who have slogged for more than a decade and have built billion dollar companies.

I am all for free speech. Yes, you should be able to debate business models. And ask hard questions. Of course share what CM1 and CM2 means. But what I feel is that you have to be self aware to ask that instead of writing commentary on Cred, why have you not built a better Cred?

Trust me, I know this is hard. To accept that you are a midwit. And curbing the urge to add your 2 cents to other people’s tweets, especially when you know your shit take on Kunal’s tweet will earn a quick 25 likes.

Inspite of me joking about me being in middle management, and a midwit, I introduce myself to everyone as being one of the 2 GPMs that run Transport for Gojek. Think Ola, Uber in India and then imagine the same for SE Asia. This naturally means I am smart and you should take me seriously. That is what I hint when I intro myself. Forget hint, I say it a lot. We all want to make ourselves feel smarter than we are, more important. We exist. We must matter. I literally have a Proof of Work page with recommendations from all my managers. I have added all the projects I have ever worked on. So that people care what I have to say. To prove that I am a top operator and not another Twitter Gyaani.

Have you noticed how none of the successful people spend as much time on Twitter as you and me? They are probably busy. A billion dollar company won’t built itself.

I know you feel you are Deepinder. Or VSS. Or Kunal. Or Sriharsha. You might have even assumed you are smarter than him because Zomato is not profitable. And as the non CEO of a non existing profitable company, you feel your opinion matters. But let’s be honest, it probably does not. Deepinder does not even know you and (and I) exist.

And that is the tragedy of us midwits.

P.S If this post triggers you, then curb your urge to argue with me on Twitter. I probably don’t care about your opinion too.