3 months back, I wrote that I will cut down my Twitter usage. Like most of my decisions, I wrote down the WHY behind it, and also the WHAT. And now it is time to do a retro of how it has gone so far.

Before we start, note that the timestamps in my blog posts are all over the place. Instead of taking the date when I write the post, the timestamp follows a series. Why? Eventually, I plan to remove timestamps, but for now, it helps me count the number of posts I have written this year. So if this post is dated as 30th May, and every day before this has a post, it means I have written 5*30 posts for the year. 150 posts!

Let us go through the WHAT again

Here is a post which a Linkedin connection had shared which sums up my views on Twitter. 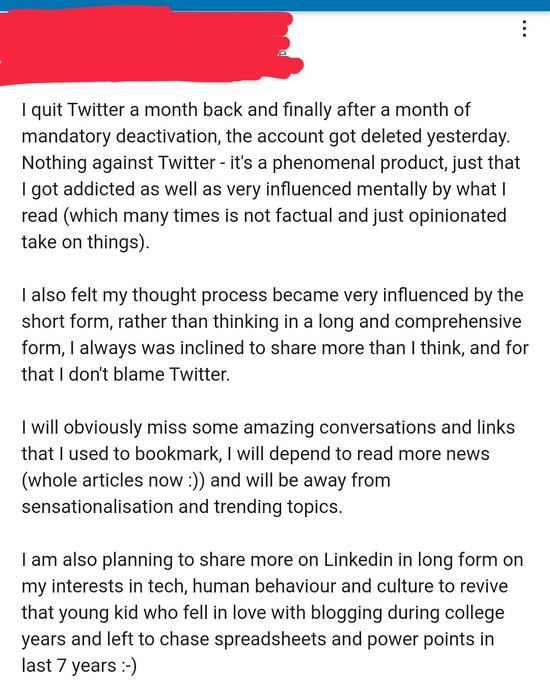 I don’t think I will take an extreme stance like deleting my account like this person, but I will surely be careful about how I spend my time: Playing long term games with long term people

Note: A lot of people might argue that this is a privileged take; that Twitter is amazing if you are from an underprivileged background. Agree to both. But then again, most blogposts are subjective, and a representation of the author’s experience and view of the world. There are thousands of tweet-storms already on why Twitter is net positive for the world. So do what is best for you.